We love you, Giorgi. ( And Paul Röhrs finally got his Thrasher Video appearance.)

He is now a Professional skateboarder and this part definitely celebrates the fact that nobody goes pro alone, you need “a little help from your friends!”.

Getting your own shoe on a company is incredibly tough. Louie Lopez already reached that status but it didn’t seem like it was that hard for him, right!? The world is a strange place. Watch one of Converse’s biggest success story explain a bit about it.

As you may have already heard, Berlin’s Denny Pham got himself a spot in the Flip Skateboards pro ranks and none other than Tom Penny himself took the honor to break the news to a clueless Denny. An overwhelming and honest joy was in the room and, besides a few technical difficulties, it was quite the perfect surprise.

Next to Tom Penny, Denny’s closest family & friends came to the Nike SB Shelter for some Pho, drinks and a piece of Denny. By the way – while Tom Penny was giving Denny his first two designs, the DJ was playing THIS song (Notorious BIG feat. Puff Daddy & Mase – Mo Money Mo Problems).

You guys think it has a deeper meaning to it? The video that introduced him to the pro life will be released tomorrow. All Photos by Julius Krappe.

Here is a LINK to a video of Denny’s Pro Party by Skatedeluxe.

If you don’t like Franky Villani on Primitive you probably also don’t like pickles on your cheeseburger. Franky is exactly what P-Rod’s board brand needs and therefore they just sealed the deal and turned him pro. Another good video from the Primitive squad.

Chris Joslin dropped parts for PLAN B, Etnies, Venture, No Hope, The Berrics and uncountable Instagram clips during the last year – no wonder his board sponsor PLAN B turned him Pro recently. Here’s his latest part, which is radical once again and was filmed during 12 days in China. Others would need months to get stuff like this together!

This is what we thought while watching:

Frenchman Remy Taveira is officially on pro status for the French brand Antiz Skateboards. The 23 year old Parisian skate-rat also has the opener section in #PleaseCharge, Converse‘s latest euro video. This is Remy for RVCA:

A dark grey sky is looming overhead, and a mixture between rain and snow has been pouring down all day. Surprisingly, Patrick arrives on his cruiser board despite this total mess; what’s more, he’s smiling and seems to be in a very good mood. But then again, that’s just how he is, smiling and laughing all the time. Plus, what probably helps him stay positive even on a horrid day like this is the fact that he just returned from Bangkok, from a four-week trip that saw him skating with friends like Farid, Joscha, and Burny every single day.

Still in high spirits after this month-long Asian adventure, Patrick is something I’d like to call a “the sun made me do it” kind of guy. Prior to meeting him I even thought he was a hippie child, but he’s actually not. He grew up in a small town called Goslar, where he was able to choose between two indoor skateparks. That’s also where he learned everything about backside noseblunt slides. 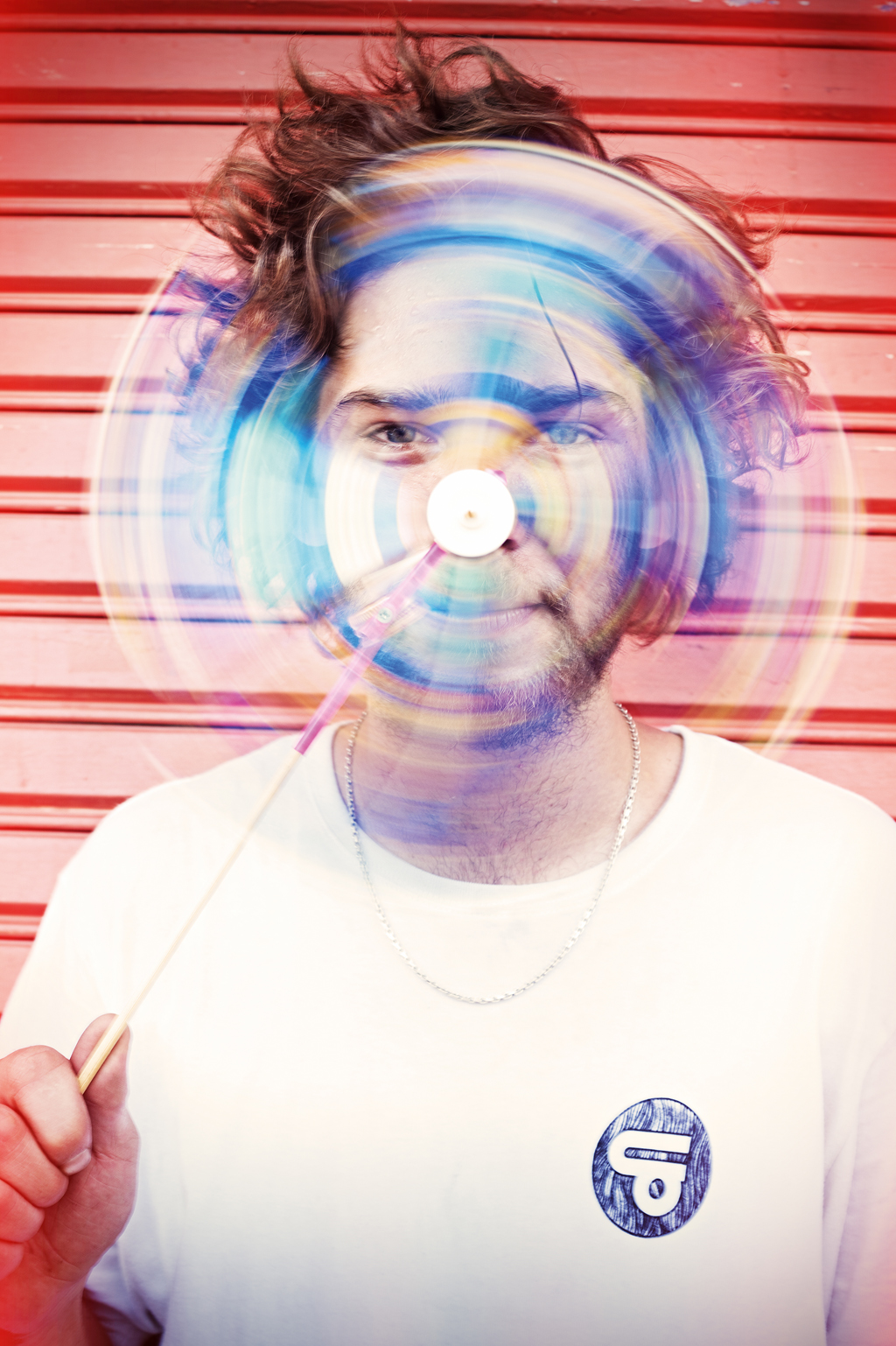 I’m a little bit surprised to find out that you’re actually not a hippie child, attending Waldorf school and growing up with laughing adults dancing around a campfire, singing songs and being just happy.
I grew up in a neighborhood with a lot of immigrants, and everyone had a different cultural background. I liked it because most of the time the people were open-minded and they didn’t judge you. Everybody had to find some way to make things work, to find an arrangement. I have always been on my own track and sometimes I got a “What’s this for a German kid?” thrown after me. Though actually I’m half Polish, but I was born in Germany. A lot of them didn’t really like my style but we used to hang out together anyway. They were more the Nike Shox and leather jacket types, and I was wearing baggy pants and skate shoes. It was okay.

How much would another company have to pay for you to join their team?
To me, it’s not about a price, it’s about that you get along with everybody in a good way, that you’re able to do lots of tours and that you can be in touch at any time. This is very important to me when it comes to riding for a company. At Titus, we’re all super down, that’s great. If another company made an offer, it’s not about the money. It’s rather the whole thing, the whole picture, you know?

There’s a football player named Patrick Rogalski and his current market value is 25.000 Euros. Would you change teams for 25K?
Ha-ha… no idea! But, for example, Louis Taubert got an offer by (German TV station) Pro 7 for a long-term documentary on him. He said that he’d never sell his soul for such crap, although they were willing to pay him a lot of money. That really impressed me and this is way more real than doing stupid shit for a few bucks. 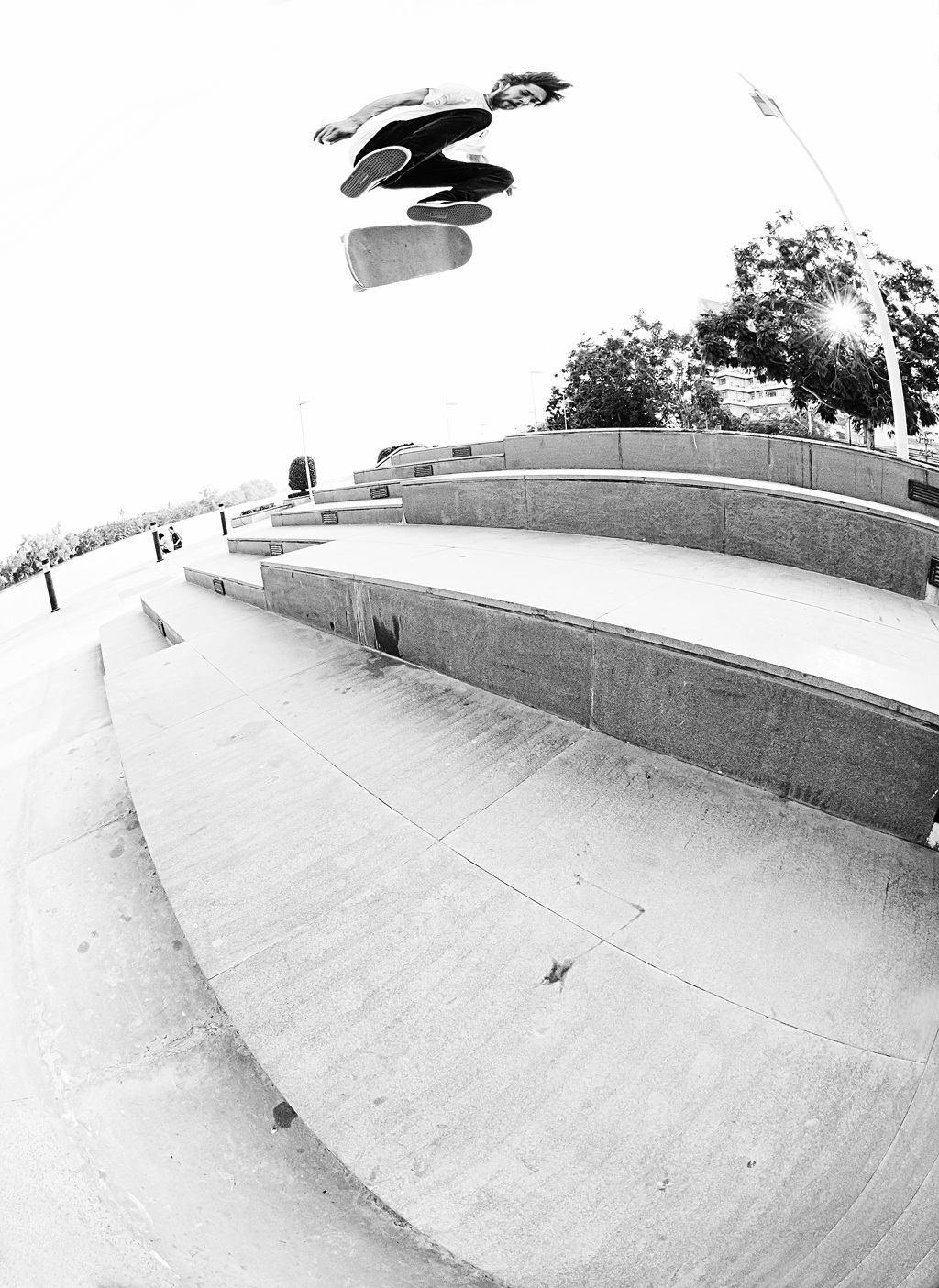 You changed your profile picture on Facebook four days ago and got 230 likes since then. How does that feel?
Feels fucking awesome, ha-ha… seems like 230 people like my photo. It’s just a confirmation that I did it right, don’t you think?

So it’s more about the right photo – and not because of your looks?
Dwag shot a good photo I guess! It’s just for the homies.

20.000 views on your last video part on YouTube. Are you satisfied?
Could always be better. But it’s better than having less that 20.000, isn’t it?

Someone in the comments section asked why you always seem to be so out of it. Are you?
How can anyone judge based on a video part?

What has changed since you turned pro for Titus?
Not much, just more hustle. I don’t work at the Titus Zoopreme store anymore so I have to make my money from skating. Or else I’d have to find another job.

So how much is it worth to be a pro then?
Personally it means a lot to me, it’s like a dream come true! When I was a kid I could never understand why all the pros where skating so good, so I always wanted to have my own board one day. I thought it would be cool. Ten years later it happened, I got my own board and I’m really happy about it! But of course it’s a known fact that you can’t buy a Ferrari when you turn pro so I am not kidding myself. I turned pro but I have to do something else on top to make it work. Like studying, which my mum has been forcing me to do a lot lately.

What are you interested in?
I think when you study it’s not about your interests. I finished economic high school so I know what I don’t want to do. I think I’m more drawn to something in the social sector, but let’s see. I don’t have a bigger goal, at the moment I’m simply working on short-term schedules. 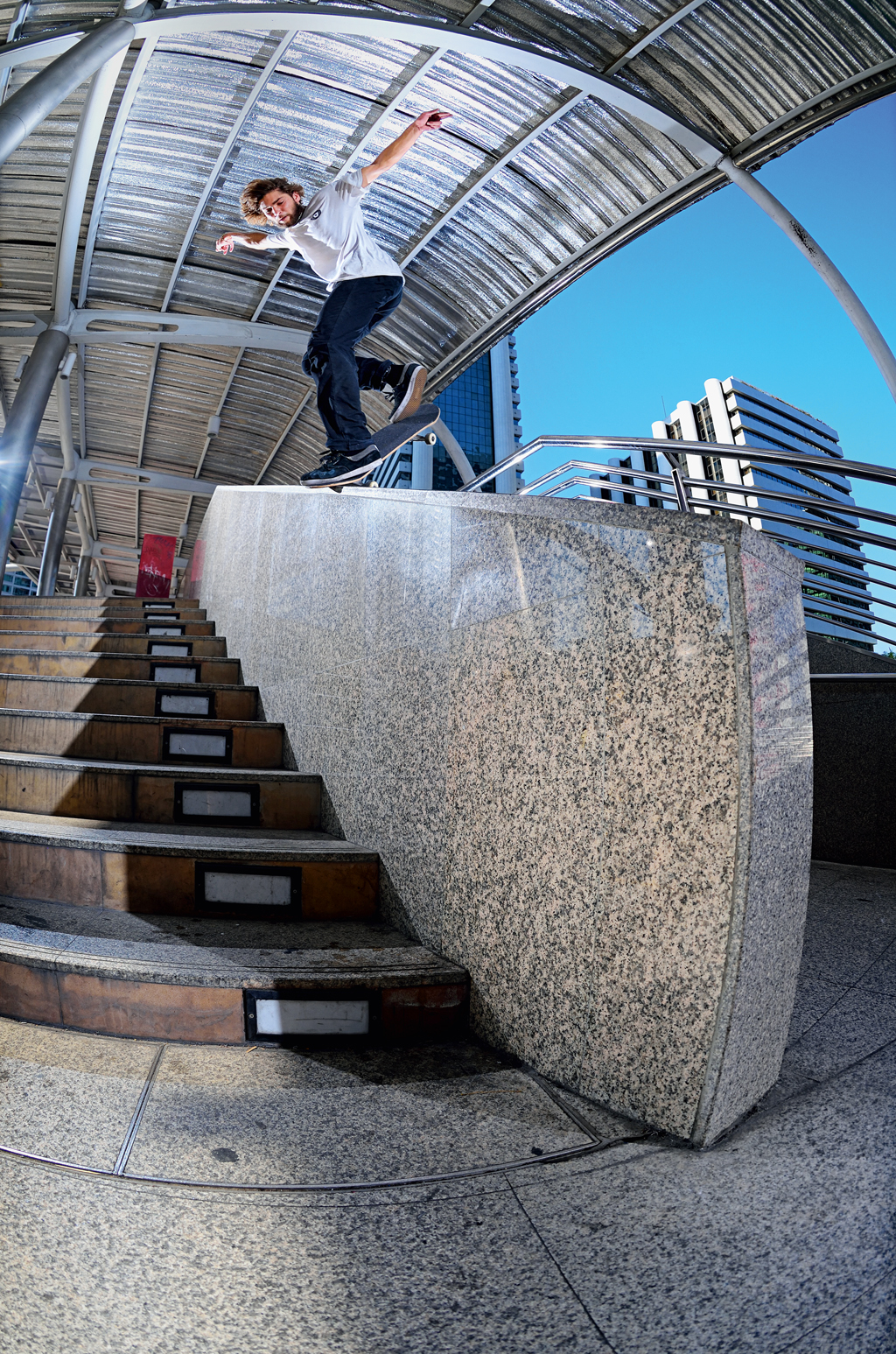 Did you know before traveling to Thailand that you were going to do the backnoseblunt?
I guess so. We went straight to the hubba the first day we arrived. I shot a photo of the spot and looked at it for days. The spot is very crowded with pedestrians so it’s definitely not easy to skate. I saved one board for the last day.

To be honest, I wasn’t surprised that you did it.
Because it’s my signature move?

Yes, you kind of destroyed this trick already before. I have seen you doing it so many times; I know how comfortable you feel with this trick. Of course, it’s a big spot but I guess it was only a question of guts and the day’s form, wasn’t it?
It’s definitely a serious hubba, and to be honest I almost shat my pants. But I had to do it. It was the day before I was going to fly home, and I needed the best possible ender. So I could enjoy a nice Gin & Tonic on the plane and be very happy after a successful trip.

You buried this trick forever.
Ha-ha, everybody should do whatever they want!

Do you think the backnoseblunt is the king of the tricks?
For me, personally and emotionally, I would say yes. It took me a long time to learn it and now every time I do it, it just feels amazing. To do it in a proper way you really need to put everything you have into it. But okay, if it’s dead now, I will stop doing that trick, ha-ha. I don’t know where to do it anymore anyway.

Patrick Rogalski is Pro on Titus Skateboards and his pro debut part will be released later this week. To get the party started, here’s the trailer. Watch out for an exclusive interview with Rogge tomorrow… 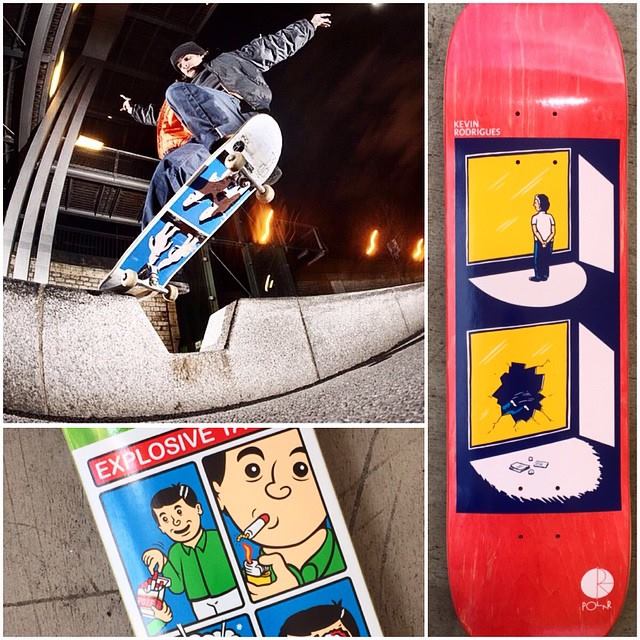 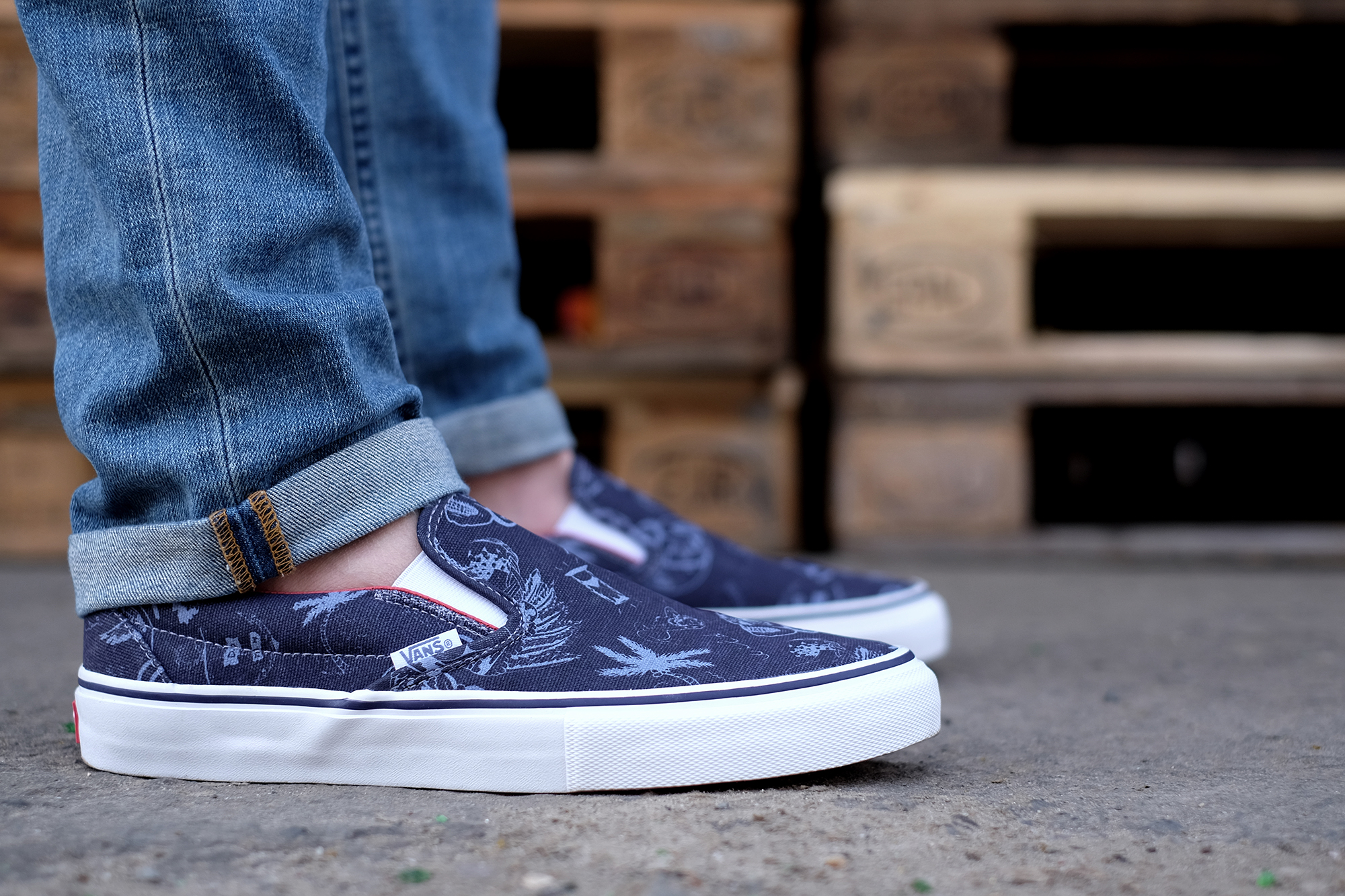